Grieving families are having to postpone farewells to loved ones as some councils choose to cut funeral services and close graveyards on the day of the Queen’s funeral.

Decisions to limit public services, including closing food banks, postponing funerals and canceling hospital appointments, are causing problems across the country and despite a source saying King Charles and the royals want there to be ‘minimum disruption’ to the public on Monday. .

But even if there is no blanket ban, more than half a dozen councils have confirmed that funerals will be affected by the national public holiday – and others are offering to postpone services according to the wishes of the families.

In Preston, council has confirmed that the cemetery and crematorium will be closed.

A spokeswoman for North Watford and Vicarage Road cemeteries in Watford told MailOnline there will be no staff on site at the cemeteries and no funerals will take place on Monday, although the cemeteries are technically open to the public.

Luton said all council services would be closed on September 19 for the state funeral. 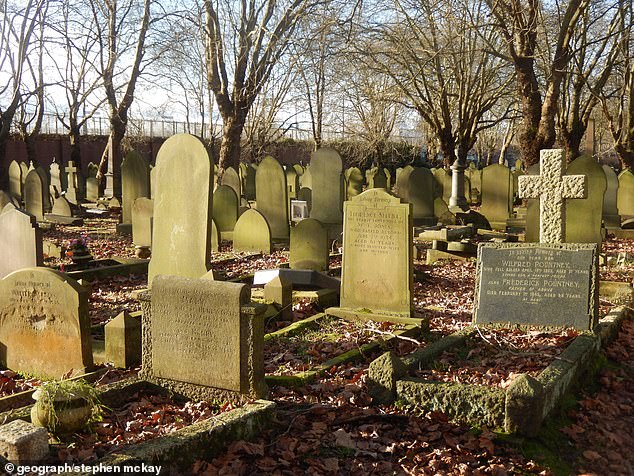 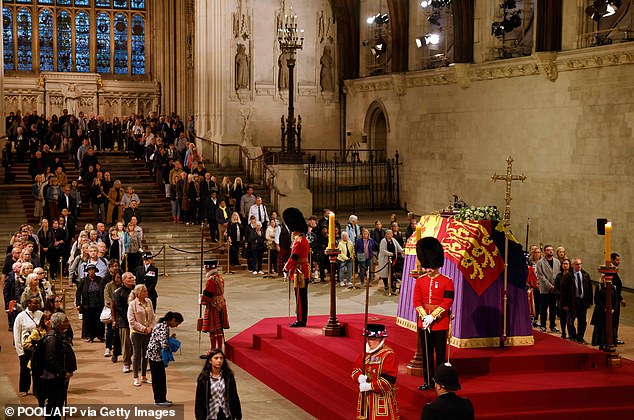 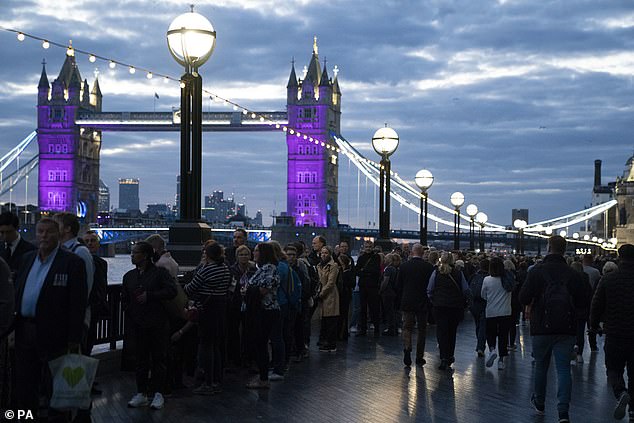 People have been queuing in London for hours to pay their respects to the Queen – this is the queue, which stretches for miles, near Tower Bridge at 6am this morning

Caerphilly County Borough Council in Wales has announced that all funerals scheduled for Monday September 19 will be postponed, but all municipal cemeteries will be open to the public.

Birmingham City Council said cemeteries and crematoria will open but operate a reduced service. The cemeteries will be open at the usual hours from 8:30 a.m. to 7 p.m.

“We are honoring bookings already made at cemeteries/crematoria, but giving funeral directors/bereaved the option to reschedule at no cost if they feel it is inappropriate to have their occasion on the day of Her Majesty’s funeral “, the council said.

Belfast City Council has told members of the public that their cemeteries will be open – although there will be no cremation or burial on Monday.

The council said on its website: “Our cemeteries will be open normally from 8am to 6pm on Monday September 19.

“There will be no cremation or burial on Monday, September 19.

“The Bereavement Services office will be closed on Monday, September 19.”

Ards and North Down Borough Council in Northern Ireland said cemeteries will be open for visitation on Monday – but there will be no interment that day.

Woodwells and Heath Lane Cemeteries in Hemel Hempstead, Kingshill in Berkhamsted and Tring Cemetery are open to visitors from 9am to 4.30pm. 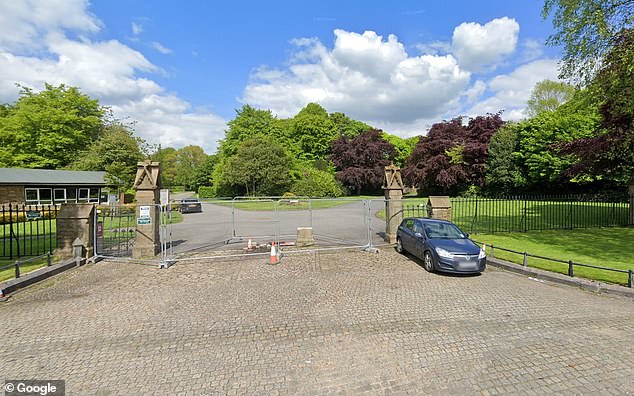 Dacorum City Council said: “We will meet existing commitments in the morning, but our offices will be closed to the public.”

Richmond Council said the cemeteries will be open between 10 a.m. and 6.30 p.m. for visitors, but the cemetery office will be closed.

It comes after a professional body of funeral directors said there was no general postponement of the funeral due to take place next Monday in light of the Queen’s state funeral and public holidays.

The National Association of Funeral Directors (NAFD), which represents more than 4,100 UK funeral homes, said some services would continue on September 19, but others would be postponed. 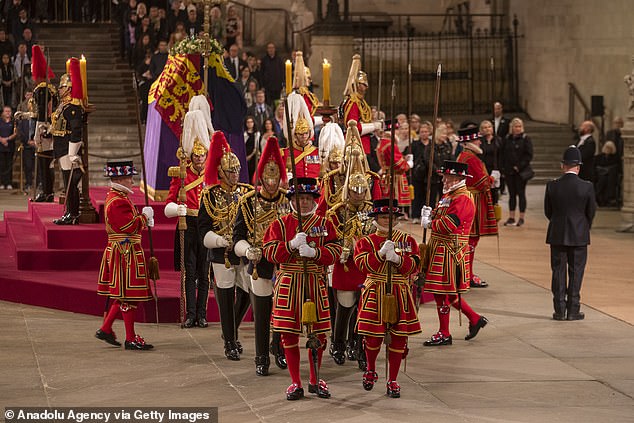 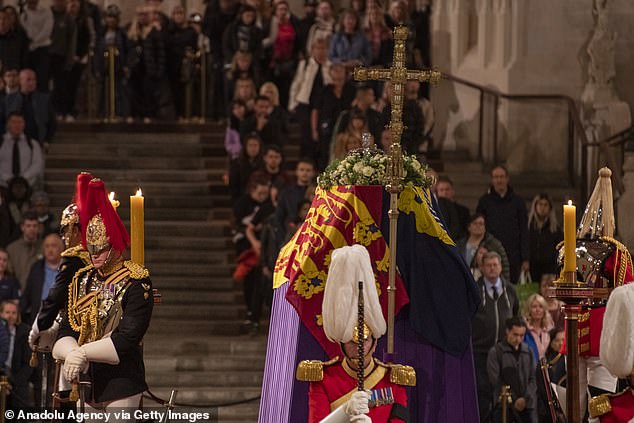 The NAFD believe ‘the vast majority of the family’s wishes are being honoured’, based on conversations with members across the UK.

He said: “While work is still ongoing, some funerals will take place, others will move to a different date – driven by the needs and wishes of the bereaved families involved.

“Most funeral services booked for September 19 will have been arranged several weeks ago, so funeral directors and cemeteries/crematoria are working with families to find the best approach for each.”

The NAFD said it was up to each crematorium or cemetery operator to decide whether to stay open or close, depending on their local circumstances.

Funeral directors are “balancing the needs” of families awaiting funerals, funeral home workers who wish to observe the Queen’s state funeral and staff who may have additional responsibilities due to closures elsewhere.

The Institute of Cemetery and Crematorium Management said decisions should be guided by the needs of bereaved families.

He said he received advice in an email from the Department for Leveling, Housing and Communities on Monday that disruptions to services such as weddings and funerals should be minimized where possible.

It said: ‘We would advise that the reserved funerals be maintained or rearranged, depending on the choice of the families.

The Local Government Association said: “Government guidance indicates that, where possible, local registry offices should remain open to the public and disruption to services such as weddings and funerals should be minimised.

“Councils need to consider a number of factors before making decisions about which services and events continue on the holiday.”

Many councils announced they were suspending and rescheduling litter collections on Monday.

The Royal Borough of Greenwich was one of the local councils which confirmed next week’s bin collection will be delayed after the funeral of Her Majesty Queen Elizabeth II.

“This is due to the public holiday and to allow staff, like all of us, to pay respect to our late monarch,” they said.

There will also be no North East Derbyshire District Council bin collection on Monday. Collections would resume on Tuesday, Councilor Ross Shipman confirmed. 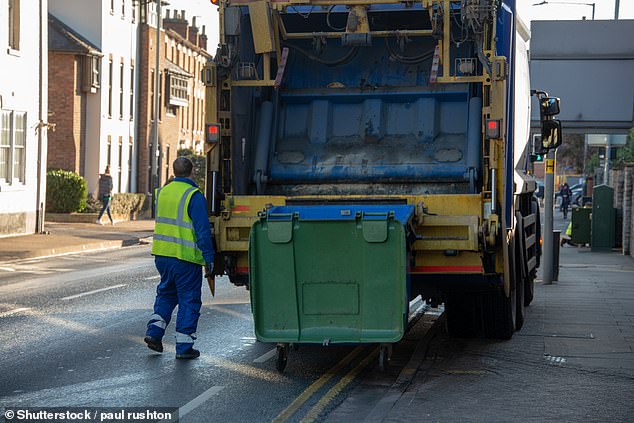 Thanet District Council in Margate, Kent, also announced the closure of all public toilets on the bank holiday.

Some councils have also announced the postponement of street cleaning on Monday.

Street cleaning will be suspended for the bank holiday and will resume on Tuesday September 20, Thanet Council said.

Kensington and Chelsea Council said: ‘Staff from across the borough will help with street cleaning duties along the route of the funeral procession. This may, temporarily, disrupt the frequency of street cleaning in other parts of the borough on Monday, September 19. Any gaps in cleaning will be completed after the funeral.

Transport for London (TfL) said: “On Bank Holiday Monday 19th September we will operate a Monday timetable on our day and night bus network.”

Three central London Tube stations will be closed on the morning of the Queen’s funeral to avoid overcrowding.

TfL has announced that passengers will not be able to start or end their journeys at Westminster, St James’s Park and Hyde Park Corner stations for “most of the morning” on Monday. 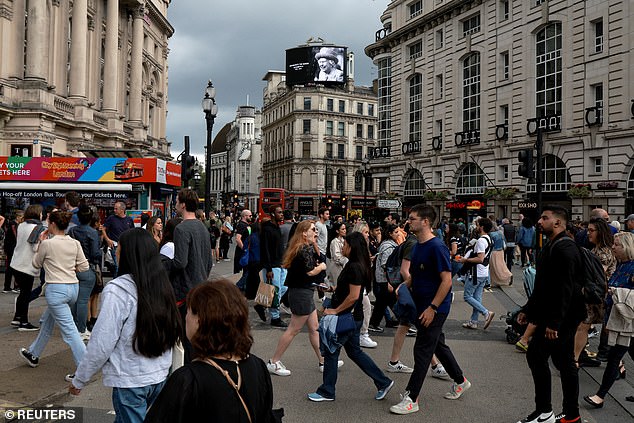 The “best option” for passengers arriving at mainline stations will be to continue their journey on foot rather than using public transport, TfL said.

The transport body said it will ‘aim to reopen stations’ after the funeral at Westminster Abbey – which will take place around midday – to help people leaving the Westminster area.

Green Park station will only be outbound between 10 a.m. and 8 p.m.

Many central London buses will be diverted due to road closures and London Victoria coach station will be closed.

The “best option” for passengers arriving at main train stations will be to continue their journey on foot rather than using public transport, TfL said.

Stratford-upon-Avon Council announced the closure of the town hall and its reopening on Tuesday.

Commemorations of the late monarch will also see the capital’s museums close for the day, with the British Museum, Natural History Museum and National Gallery all closing.

The majority of public parks are expected to remain open Monday.

NORTH BERGEN — Police officers and community members have donated thousands of dollars to a funeral fund for a township police officer who died in a weekend accident on his way to work. As of Monday afternoon, more than $31,000 had been raised to help the family of North Bergen police officer Julio Noriega rest […]

Dozens of libraries across New Jersey are in line to receive another round of funding that was approved by voters four years ago. Governor Phil Murphy’s office announced the second round of funding for the Library Construction Bond Act on Thursday, which will allocate $37 million of the $125 million approved total for technology updates, […]

Aging and moving out of NJ

If you’re in your pre-retirement years and thinking about moving out of New Jersey, you’ve got plenty of company. AARP has come out with a new survey that further underscores that New Jersey is a less than desirable place to retire due to the crippling cost of living and the highest property taxes in the […]