WINDSOR, NS — Taking a walk along the trail around Fort Edward National Historic Site in Windsor looks a little different these days.

Earlier this year, Parks Canada employees cleared overgrown brush on parts of the hill as well as old green space surrounding the property, giving visitors a better view of the Avon River.

This is an improvement demanded by history buffs and the general public.

In an interview, West Hants Mayor Abraham Zebian said the topic of view plans was discussed at a meeting with Parks Canada staff in the fall.

“Lines of sight were brought up with them and they told us they were going to clear all that brush,” Zebian said.

“It looks great and allows you to actually see… historic sight planes over the River Avon. That’s what was traditionally there. It brings that back.” 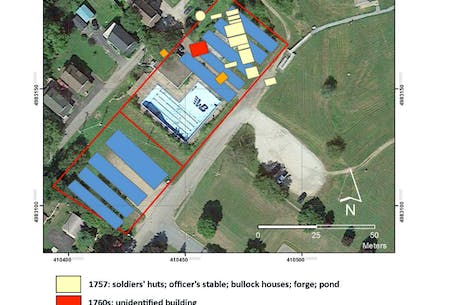 Fort Edward National Historic Site has come into the spotlight over the past year due to West Hants Council seeking to sell and rezone municipally owned land adjacent to the fort.

During the pandemic, the Regional Municipality of West Hants considered Windsor’s old Centennial Pool, which was demolished in 2019, and the adjacent parking lot as surplus properties. The land lots, located at 36 and 65 Fort Edward Street, are adjacent to the Fort Edward National Historic Site.

A developer is interested in building an apartment complex on the site. However, there has been pushback from the community, as well as special interest groups – such as the West Hants Historical Society and the Acadian Federation of Nova Scotia. They want to see the land preserved and potentially developed into a tourist interpretation center with toilets, an old-fashioned trading post or a picnic area with signage.

The nationally designated site is linked to multiple military-related historical events – dating back to the 1700s. The oldest and continuous agricultural fair in North America began on the grounds of the fort. The wooden blockhouse, which still stands today, was built on top of a razed Acadian church, and the fort played a role in the expulsion of the Acadians, imprisoning and deporting more than 1,000 people.

One of the issues cited with the potential sale and construction is the impact it will have on the view of Fort Edward.

As the site was a military encampment, it was built because of its vantage point, allowing troops to see approaching enemies by land and sea.

In March, councilors recommended that they take a trip to the fort to see the sight for themselves.

In a report to council, Phillips noted, “The site offers great potential not only for recreational activities, but also for special events and additional historical promotions.

Zebian said staff are currently studying how the municipality can better utilize and promote the space.

“Parks Canada is very open to working with us to promote it to our local residents and we just want it to be somewhere our families can go and enjoy and just appreciate the space,” Zebian said.

A New Jersey family learned the hard way to put passcodes on their phones after their 22-month-old racked up $1,700 worth of online orders on mom’s phone. The Kumar family had just moved into a new home and, according to News 12 New Jersey, the mother, Madhu, was browsing Walmart furniture on her phone and […]

A Brick man had what could turn out to be a very profitable surprise while eating raw clams in a restaurant in Cape May: there was a pearl inside one of his clams! According to NJ.com, Michael Spressler and his wife were dining at Lobster House and he was enjoying his usual appetizer of raw […]